© 2009 Ted Saker, Jr. All rights reserved.
Country of First Publication: The United States of America
These works are for the personal viewing and enjoyment of visitors to this site.
Any and all commercial use of these images is absolutely, strictly and totally prohibited without my consent.
Remember, I sue people professionally. Besides Astronomy, it's what I live for.

Each successive Texas Star Party seems to come and go faster and faster. This year's TSP was held April 19 to 26. Once again, Craig Colbert beat me to the front gate even though I arrived six hours earlier than I have ever previously managed. Rather than sleep at the gate, we finagled our way onto the ranch, and spent a cold, windy, clear night observing with my ETX-90. This year, TSP graced us with four straight clear nights, and five clear nights out of seven. I tried to put the time to good use, and captured some images and completed John Waggoner's Telescope Observing Club (5x5) and the Binocular List..... from HELL!!!.

The guys fom Celestron (yes, that Celestron) brought a couple of new scopes to TSP.

Six weeks later, I'm writing this page, looking back in retrospect, and wondering how my ninth TSP went by so fast and how I'm going to pass the next eleven months until the next one. I suppose that the best answer to that question is to get busy processing images. 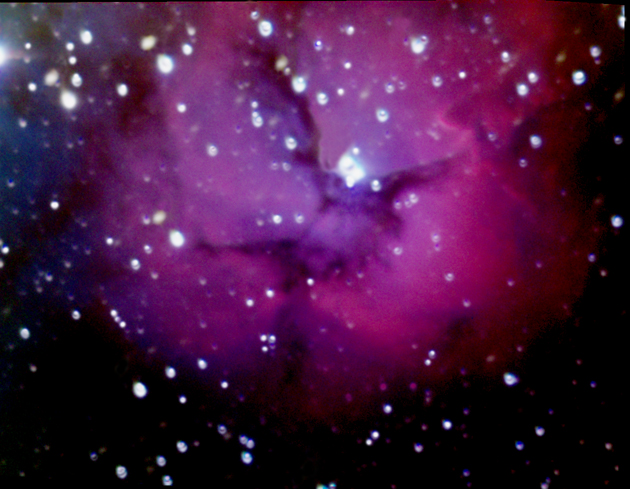 March 17, 2011: The reprocessed Trifid.
(Click on the thumbnail to view the full-size original image.)

Some images of the beautiful Davis Mountains region taken with my cellphone on the road to TSP.